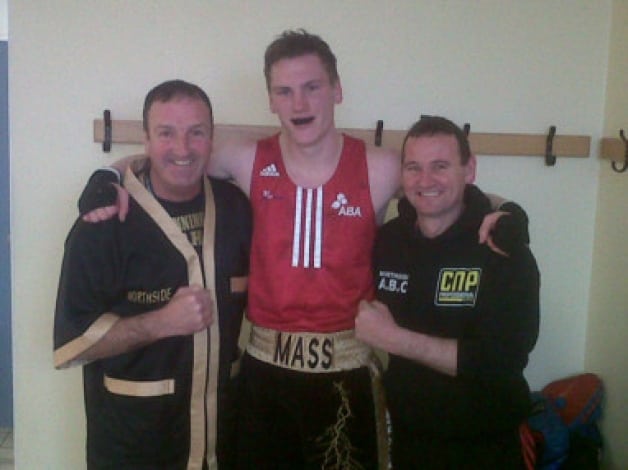 Massey will face Southern Counties’ Chris Billamm-Smith at the Rainton Meadows Arena in Sunderland on Saturday.

Massey secured his place in the final, which is to be shown on the Box Nation channel, after impressive wins in his previous three outings, starting in the pre-quarter final stage against Yorkshire boxer Nicolie Campbell.

The Chapel fighter rarely had to move out of first gear in this bout, catching Campbell with scoring shots at will on his way to a unanimous victory.

A week later, Massey was pitted against Army boxer Christian Flynn. Massey started the stronger, hitting Flynn with hurtful headshots and whipping in hooks to the body. One such hook dropped his opponent to the canvas for an eight-count.

The second round started much the same until Massey caught Flynn with a left-hook which seemed to take his feet off the canvas. Flynn rose at the count, only for the referee to intervene.

Next up for Massey at Everton Sports Centre on April 7 was North East boxer Michael Watson in the semi-finals. Watson started the brighter, catching Massey with point-scoring jabs.

Massey came out in the second round with a different tactic, attacking Watson on the ropes and mixing his shots from body to the head.

The third round was much the same with Massey keeping the pressure on, eventually running out a clear winner with four of the five judges scoring in favour of the Chapel winner.